St. Vincent – Daddy’s Home – The Past Is the Future

Diverted Gaze > Music > St. Vincent – Daddy’s Home – The Past Is the Future

St. Vincent is one of the most original figures in contemporary music. Her songs offer self referential examination of the media through the lens of her musical persona, while at the same time having profound encounters with real experience. Annie Clark’s music skirts between intellectual spaces that don’t sound like anyone else while also having a pop appeal that makes her variety of art rock infectious enough to be commercially successful without sacrificing profundity. It’s very appropriate that the new album, Daddy’s Home, is an homage to the 1970s, a time when bands like Pink Floyd were an enormous commercial success while also transforming music and the experience of sound in radical ways. The self referential nature of Annie’s oeuvre becomes a study of representation itself, allowing these songs to exist in a world of their own that is abstract yet grounded in life.

Daddy’s Home takes that astute study of the media and artistic depiction into a sweeping exploration of the 1970s. This is a great era for music and pop culture and sees regular homages through examples such as That 70s Show, Quentin Tarantino’s now classic Jackie Brown, and a number of excellent retro horror films set in that time period, such as the exceptional We Are Still Here. Most musical attempts to draw on the era are not as successful as what St. Vincent has managed to do, in spite of many attempts by good 21st century artists. Most simply end up sounding like their normal contemporary selves with minor borrowings that either don’t stand out or don’t build a cohesive whole. Daddy’s Home is a grand exception to that. The new album is replete with sounds, style, and themes drawn from the 1970s and manages to be quite convincing at having an encounter with a past era while updating its sounds and themes to have striking relevance. As has been the case on other St. Vincent albums, this is a progressive album ripe with experimentation and odd choices that leave Annie Clark a one of a kind force.

The album opens with “Pay Your Way in Pain”, a song with obvious roots in soul and gospel, which sounds down and out in a way that fits the era it is drawn from. The 1970s were filled with high inflation and high unemployment combined with progressive and radical politics, a mixture which seems strikingly close to current concerns as prices rise across the board after passing through the worst of the pandemic. It’s a song that plays the toughness of her persona against the desire for something better, with the overtly simple concluding line of, “I wanna be loved”, coming after descriptions of no money and empty shelves. It’s a contradiction to put serious concerns of living against a basic want, like much of her work, and it fits the era perfectly with bleak material problems set against hopes for the future. A review of 1970s films shows dark times with radical hopes for a more progressive and equitable future. Annie works the great 1970s independent filmmaker John Cassavetes into the album, and his classic films like Woman Under the Influence and Killing of a Chinese Bookie show a bleak world of chaos, collapse, decadence, and deprivation sitting underneath the hopeful claims of the era. Cassavetes is a clear precursor of the world David Lynch later showed in Blue Velvet with its corrupt noirish underbelly beneath civilized life. This irony of normality covering a depraved and mad world of repressed desire infuses many St. Vincent songs. The pre-pandemic song, “Masseduction”, with its line of, “Mass destruction, don’t turn off what turns me on”, portrays a world ripped apart by its own desires, sometimes sublimated and sometimes twisted into commercialized pop representation. 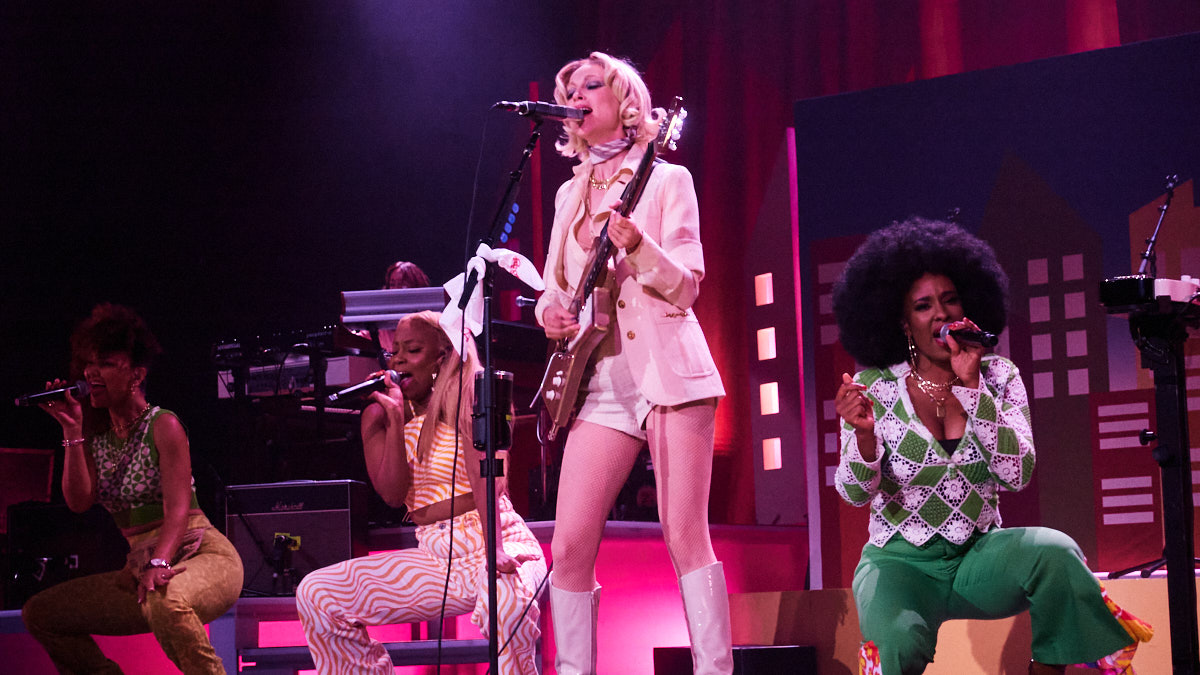 Daddy’s Home is set against a very recent problem, which is that Annie’s father spent time in prison for a financial crime. It’s an odd personal circumstance to come through in the work of an artist who obviously exists for music and performance, so much so that she is able to constantly shape an interplay between the real person and the stage portrayal. Having her father sent to prison for the machinations of a financial world quite different from her own is a very concrete problem, and her performance art is up to the task, combining personal confusion with social chaos into a strange whirlwind of a dream that seems out of time and searching for a place. It’s all the more interesting to see this album and tour, grounded in a personal tragedy, happening after a pandemic that created so much confusion. The personal story reaches into the disrupted times we live in, a somewhat still vacuum of meaning after the world nearly collapsed under the weight of a virus. Not only does the current regime of inflationary price increases recall the 1970s, but Joe Biden entered politics in that decade as well. St. Vincent seems to have distilled our own troubled times into a reflection of American history.

The “Daddy’s Home” song references this with cautious depth. It captures a depressive state of sadness, being displaced, and questioning outcomes. Both having her father in prison and then having him finally free are confusing circumstances which leave the world unreliable, given the trust and reliance placed upon a father figure. So, the song and album both reveal St. Vincent as confused and directionless, a situation which points to creative power in reconfiguring her world and personas through art. “I look down and out in my fine Italian shoes”, set against her father wearing a government green prison suit shows how contradictory Annie Clark’s world is. This album captures tragedy, and “Daddy’s Home” leads into “Live in the Dream”, a dreamlike song of imagining a different world that captures the harshness of being harmed and facing dangers in reality. The song was captured beautifully through slow motion choreography in the live show from the Daddy’s Home tour. It was quite touching and can only  be understood in person, the strangeness of seeing everyone on stage moving incredibly slow like a set of living sculptures. It created a removed and dreamy experience that reflects the surreality and otherworldliness of the artifices she is able to create.

With all the personal references on the album, it is worth pointing out here that Annie’s family also includes bright points. Especially relevant is her aunt and uncle’s jazz duo of Tuck and Patty. They opened for her on the Masseduction tour and played a role in her entering music while she was growing up and working on their tours. It’s obvious that jazz has played an important role in her development. I frequently commiserate that more contemporary musicians don’t learn from jazz. As Damien Chazelle has shown in his films, jazz is frequently more experimental than contemporary music, but is too often relegated to classicism. Musicians from many decades ago simply had a broader palette to work from than many contemporary popular musicians (dealing with a commercially canned production environment designed to predictably sell things), and Annie’s upbringing in that world is clearly reflected in how unconventional, creative, and challenging her songwriting and assembly of sounds has been.

One of the only contemporary musicians who is as challenging is the industrial artist Raymond Watts of PIG, who has as well gone into the past (more eclectically) with an eerily dark recreation of songs from earlier eras on his cover album, Candy. Like St. Vincent, Watts is able to comment on and take apart contemporary culture and has a wide open pallet that is intellectually exciting while being dangerously fun. Annie has been able to go past underground scenes though and make that sort of work into something mainstream. While PIG is great for its underground edginess and genuine subversiveness (Watts sounds like a heavy chorus cast up from hell at his best), St. Vincent is great for doing what Pink Floyd did in making something radical and esoteric exist in the mainstream, as though one of David Lynch’s dark dreamy films or Andy Warhol’s paintings of representations reflected back onto themselves came to life – a representation of reality overtaking the real world. 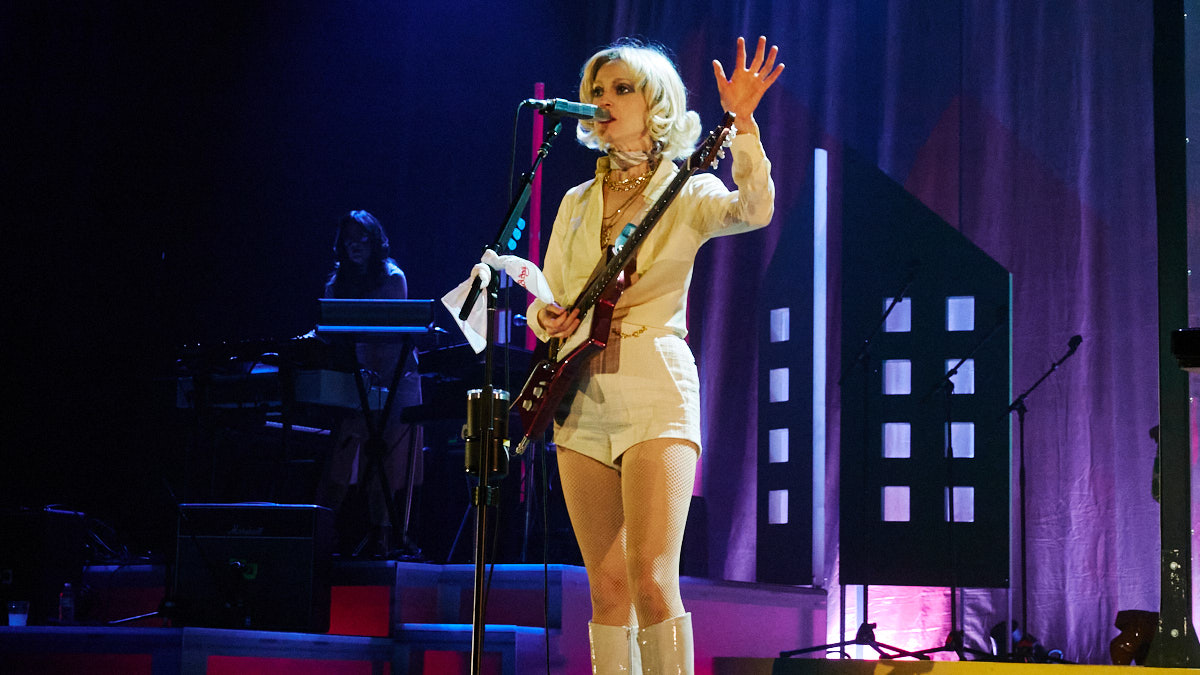 Another album highlight is “The Melting of the Sun”, a song that is impossibly catchy and emotional. It portrays a down and out world that is out of control, spinning in all directions. With the line, “Proud Nina got subpoenaed, singing Mississippi good goddamn”, placing a powerful emotive emphasis on a collapsing world. This line proved moving for the whole audience to jump in on singing live, a fun way to see that it has a similar effect on so many people, as well as on Annie Clark who ripped into it. Similarly stunning was her performance of the great “New York” from the Masseduction album, a song that obviously holds a special place given the influence of that city on her work. It is clearly a jazz song shaped into a rock track, and I can’t help but imagine that Sinatra would have loved to sing that song, not a song about an upcoming bustling city of promise and opportunity, but a bold statement of creative meaning set above decay with a pledge that the fight is worth it. “I have lost a hero. I have lost a friend, but for you darling, I’d do it all again”, are words to live and fight by. It’s a song from shortly before the pandemic, and it has a completely shattering resonance after COVID swept New York into what looked like a George Romero movie with crazed people like Andrew Cuomo becoming more bizarre than any zombie. It’s a moving track performed live, and equally stunning were the slow dark ghostly cadences of “Slow Disco”.

The tour for Daddy’s Home is one of the most unique and well conceived tours I have seen. It was a powerful recreation of the 1970s with obvious revelations of calling attention to itself being shaped as an artifice, small subtle touches pointing to being a representation rather than a real thing. Her live band and backup singers were exceptional, with a good funky bass player and jazzy keyboards grinding powerfully alongside a drummer with subtle changing rhythms, not a high pounding rock style of drumming, but an eclectic jazz influenced percussion grinding along while Annie’s guitar took over with her bizarrely beautiful experimental screeches leading the night against a powerful and perfect range of emotion in her voice.

The Nowhere Inn came out very recently during that tour as a new film and soundtrack, and that deserves its own review. It’s an excellent somewhat ambient companion and experimentally dreamy addendum to Daddy’s Home, marking an important year for St. Vincent. These recent releases and tour are oddly appropriate for the pandemic era. In a time when the world seems to be collapsing, it is refreshing to see music engage so powerfully with a past era that seems safe in comparison but was in fact filled with similar problems. The Nowhere Inn captures emptiness in a way that seems to have a space made just for its existence after seeing the world fall into so much nonsense. St. Vincent is the artist of this era. That is made even more clear by the continual plays of representation and hyperreal events which make up the 21st century, a world mediated by far too many cell phone screens. Annie Clark’s ability to create personas and resonate truth within them, and then show the limitations of what she portrays and change gears to yet another persona is the best reflection of how human beings currently live through endless cycles of false depictions that any musician has constructed of late. To achieve that and still have so much emotion, soul, and personal expression is a profound achievement.