Alice Cooper has been making rock and roll longer than a lot of people have been alive. His endurance and continual relevance is an accomplishment in itself. After a long and storied career spanning more than five decades, every era has had a reinvention of Alice that keeps his music sounding contemporary all the time while staying with the themes that made him such a great artist in the 1970’s when he had mega hits like No More Mr. Nice Guy, Under My Wheels, Be My Lover, School’s Out and so many other great songs.

His songs combine a love of rock and roll with an astute examination of American culture and his infamous shock rock, which in actual practice is closer to well conceived and carefully realized theatre than to anything disturbing. His show in Loveland, Colorado at the Budweiser Events Center for the Detroit Stories tour was the most impressive concert I’ve ever seen. The costumes and props kept changing with the songs, and many of them had their own individualized staging with props only coming out for one song.

It was a bit like seeing a horror movie, but of the beautifully atmospheric type that Universal Pictures made in the early days of cinema with Dracula, The Mummy, and Frankenstein, where the films are rich in atmosphere and drama. Alice worked with John Carpenter in the 1980s on Prince of Darkness and recorded the song He’s Back for a Friday the 13th movie, both as part of his comeback with Constrictor and Raise Your Fist and Yell, important 80s classic albums made with guitarist Kane Roberts, which were the precursors to his return to mega success with Trash in 1989 after having a rough period in the early 80s. That is more than 30 years ago though, and Alice has not missed a beat since. Every decade has good albums and tours as a beloved performer and exemplar of heavy metal and horror aesthetics that touch people and create a unique world.

His latest album, Detroit Stories, is one of his most successful, with shockingly high charting. This is an era where streaming has pushed out the importance of album charts, but it is still an amazing accomplishment. The album is a great look at where Alice came from as a Detroit musician and where music is today, as America looks like it is decaying much like Detroit. It also is an important pandemic album with a haunting look at the state of America.

Alice performed with energy that I couldn’t quite believe. His voice sounds as good as the 1980s, if not hitting the high notes of the 1970s, with a fantastic velvety sound that is addictively fun to sing along with. He danced around the stage with props like a seasoned dramatist with a perfect craft, and he ran around with a foil sword like he took fencing classes that would wear out someone half his age. There was no opener, and as people said to me after the show, no one could open for him. The list of things that Alice is able to do in one night as a classic performer working in genres that are richly alive today with great love for his work makes him a one of a kind event to see. 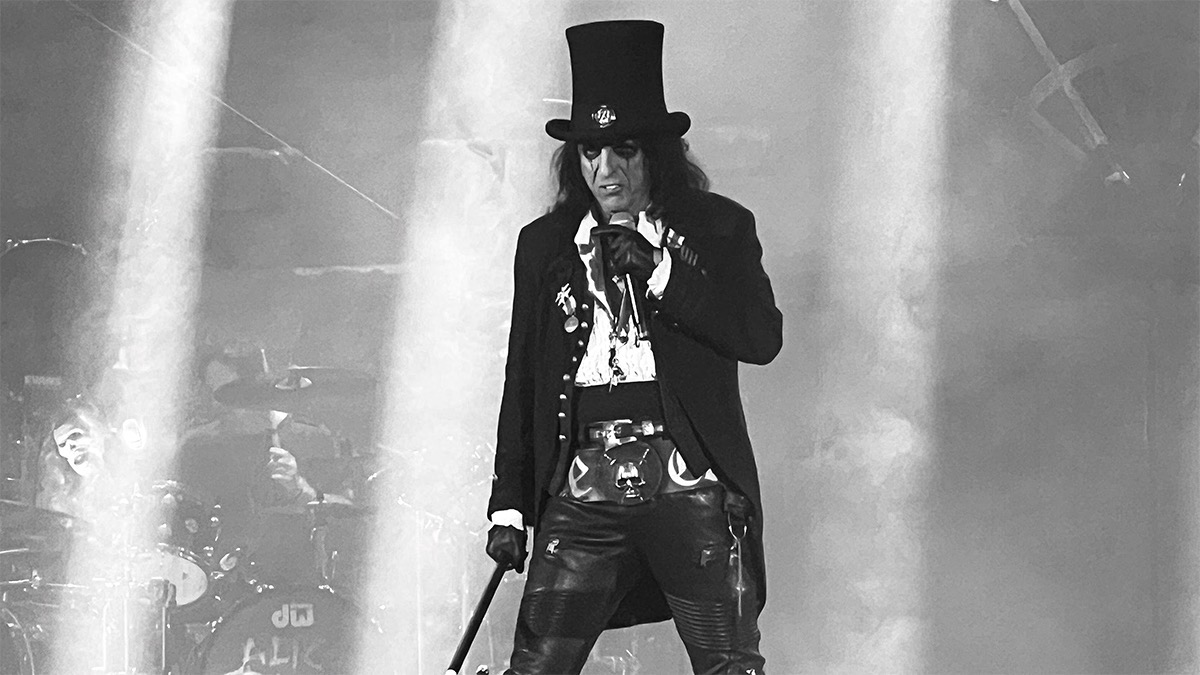 After so many years of touring, he is a master at leading a band, and his whole band is top notch in all respects. This tour features the return of Kane Roberts with Nita Strauss stepping out of the band, though she did play in Loveland during School’s Out. Kane sounds phenomenal, and it was a pleasure to see Alice back with the guitarist who created two of my favorite classic albums with him. I grew up on Constrictor and Raise Your Fist and Yell as the albums that turned me into an Alice fan and discovered his great 70s work from there. They were beloved by heavy metal audiences and not quite understood by critics. In retrospect they sound as good or better now as they did when they were released. Alice is an insightful cultural persona at seeing what is happening in music and society in every time he works and reflects that back in his music. Today, those albums capture heavy metal’s biggest period of flourishing, the 80s, while not sounding dated the way some other recordings from that era do. They sound universal and timeless just like much of his catalog.

This tour brought back the album opener, Freedom, from Raise Your First and Yell, beautifully staged with American flags and a giant monster trying to rule over everyone. Alice gave a strong reminder of the original intent of the U.S. flag, a symbol of revolutionary people who overthrew tyrants, and not a symbol that is supposed to be co-opted by new tyrants seeking to control everyone else. With lines like, “You want to rule us with an iron hand. You change the lyrics and become Big Brother. This ain’t Russia. You ain’t my dad or my mother.”, the song was quite predictive of some of the controversies about people being able to speak freely that happen today alongside varying technological efforts to extort governmental control over a free population. There was also a very nice Ukrainian flag, and no one was wearing a lapel pin. Roses on White Lace was played as well, with beautiful dark drama from Alice, making room for the album’s opener and closer. He’s Back from Constrictor also made it into the set, with Alice dramatizing the song like he was telling a classic ghost story.

Alice was beheaded by his wife again, but he survived to play an epic version of School’s Out. Leading up to that was a beautiful performance of Steven/The Awakening/Escape from Welcome to My Nightmare, another long time favorite album. The way was paved for this by a haunting performance of Devil’s Food from the same album earlier in the set. The way a coherent and dramatic setlist was built from so many eras made this a grand theatrical show to see along with the top notch playing. Eighteen, Under My Wheels, Be My Lover, No More Mr. Nice Guy, and Billion Dollar Babies were other classic highlights, and I Love the Dead got to do it’s a job as a joyful post guillotine song. School’s Out was played with Pink Floyd’s Another Brick in the Wall, clarifying Alice’s point about freedom, and the closing had a beautiful display of streamers, confetti, and giant balloons. Alice did well, and he gives it back and is still the best there ever was. He asked who Halloween was for at the end of the show, and the entire audience erupted with, “you!” Alice said his show means it’s for all of us. 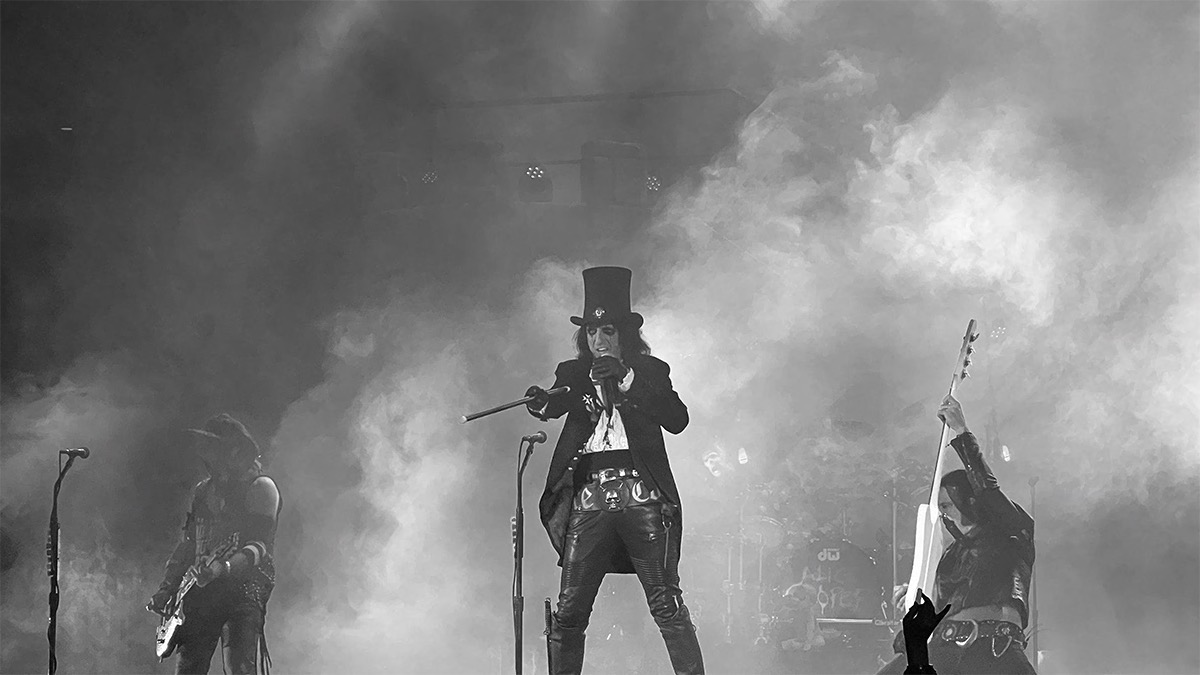