Egypt: The Time of Pharaohs – A Stunning Perception of Time

Diverted Gaze > Egypt: The Time of Pharaohs – A Stunning Perception of Time

The Denver Museum of Nature and Science recently hosted one of the best Egypt exhibits to travel around the world with a sizable antiquities collection. Egypt: The Time of Pharaohs hosts over 350 objects, making it a sizably larger collection than the Tutankhamen exhibits or the major The Quest for Immortality exhibit of over 15 years ago. As traveling exhibits go, this deserves to be a major event. 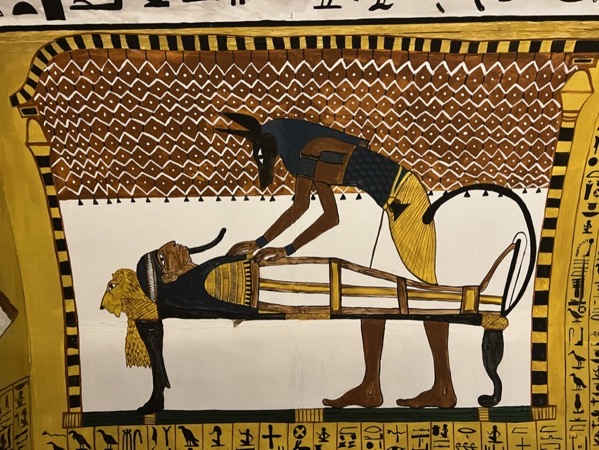 The collection is especially remarkable for attempting to present Egypt’s entire multi millennia sweep of history, from the predynastic Naqqada civilization, through the old, middle, and new kingdoms leading up to its end with Ptolemaic Greek and then Roman times. There was a nice reproduction of paintings from the tomb walls of Sennedjem, contemporaneous with Ramses II. As I discussed with one of the event curators, one of the most remarkably misunderstood things about this civilization is the sense in which it disrupts normal perceptions of time within our own culture. The United States is only a bit more than 200 years old, and our beginnings seem far away already. A person living in Egypt’s Middle Kingdom, more than a millennia before its end, would have seen pyramids that were already more than a millennia old. It is impossible to comprehend a civilization lasting for 3,000 years in the present. The collapse of Ancient Rome was less than 2,000 years ago from present times, but that is not even very long compared to the stretch of time over which Egypt remained in most respects one culture and civilization throughout antiquity. 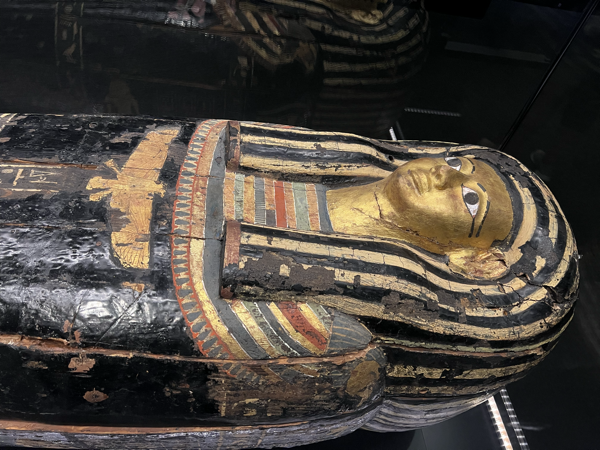 This is hard to comprehend, but the exhibit helps to grasp that a bit, and it also shows off the superb artistic skills and symbolic sophistication of craftsmen from thousands of years ago. There is a fairly large selection of Old Kingdom objects dating back more than 4,500 years ago. To put that in perspective, it is hard to imagine many things in the present being around in a century. In a millennia, it is highly unlikely that many of the buildings around us will still be here. Environmental and potential nuclear warfare problems leave questions about whether human beings will even still exist by then. Being able to see objects made more than 4,000 years ago is a remarkable thing when you ask yourself what will still be around 4,000 years after ourselves. 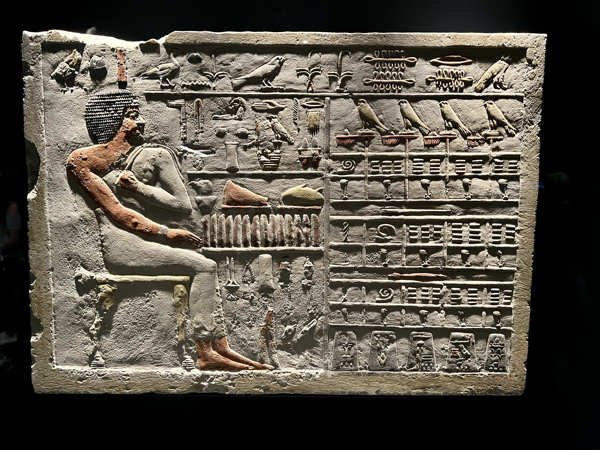 Egypt was responsible for building quite a bit of what came down as later civilization. This was the very beginning of having a civilization at all, and the beginnings of agriculture. Egypt had a rich and dense mythological world to reflect that, with the sun god having special prominence throughout its history. While that seems odd to present times, how can anyone have crops or agriculture without the sun? Egypt was a harsh desert overwhelmed by the heat of the sun’s intense light over desert sands, but the annual flooding of the Nile river made for rich agricultural land with regular and predictable cycles. This was the key to Egypt’s wealth and prominence, and its fascination with the sun seems sensible when you consider human beings of the same intellectual capabilities and physiological features of the present surrounded by barren desert, a fertile region of land for farming, a clear night sky… and blinding hot sunlight conditioning their lives. 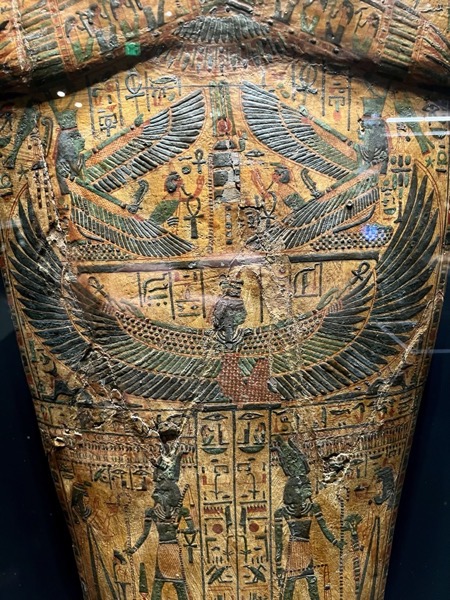 Like many early civilizations, a culture emerged that was very sensitive to nature, and it adapted to the terrain of the people who built it. Scarab beetles were sacred, because they reminded this culture of the journey of the sun. While this might not seem obvious to us, a person surrounded by harsh bright hot light and sand would have been quite excited by seeing a beetle emerge from the barren sand rolling a ball of of earth around. The Egyptians concluded that the scarab beetle, which lays eggs in balls of dung, was creating life from death. For people worried about heat, drought, and barren desert, this seemed like a miraculous thing, just as much as the continual Nile floods seemed like a work of the heavens. 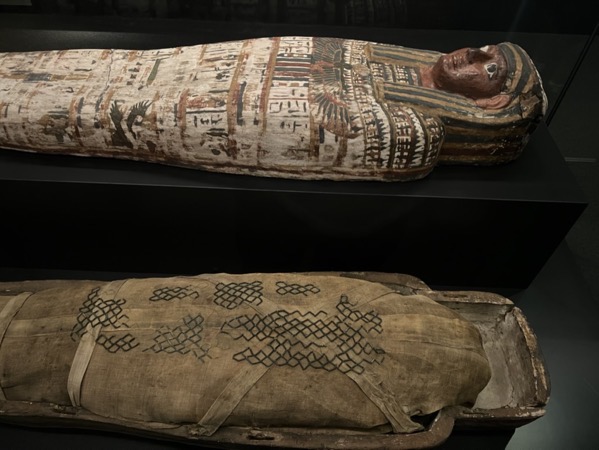 For any cities which get this exhibit in the future, it can’t be recommended enough. Several museum visitors had been to Egypt to tour the monuments, and the museum brought in a beer archaeologist to talk about beer in ancient Egypt. Their people liked bread, beer, and beef especially, and they made early pottery by hand to enjoy those things. 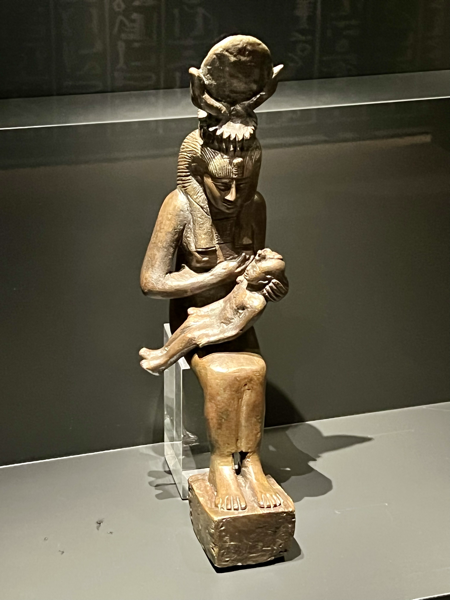 The Egyptians were obsessed with immortality, and much of their culture focused on the afterlife and proper burials. Just like the cycles of the sun and the Nile river, they viewed time and nature as eternal things. Having life extend beyond death wasn’t unusual for them but was considered normal. The afterlife was depicted as similar to normal life and was a continuation of good things in the normal world. Christianity’s alleged innovation of eternal life, which only happened as a cult thousands of years later in the ancient world looks a bit stolen by comparison, and the archaeological record has a whole lot more objects from Egypt to tell a fascinating and timeless story. 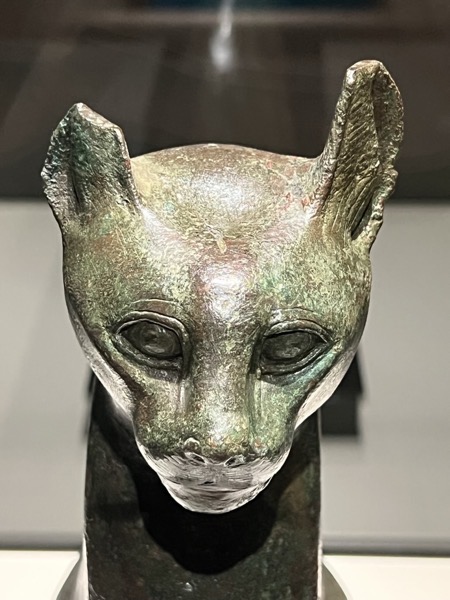 This as well distorts time. Egypt sought eternity, and it’s monuments and artistic objects survive thousands of years later to attest to that. There must be a good idea in there somewhere. They also loved cats, and the internet seems to agree with them on that. Instead of Instagram cat photos and videos, the Egyptians made scores of endless cat statues and mummies in the thousands. They also kept them as pets very prominently. If that seems surprising, consider again the role of agriculture. Wheat and grains were precious to the survival of their whole civilization, and cats kept pests away from the grain stores. They also have a habit of rolling around in the sun, again fitting in with this ancient culture’s appreciation of everything solar. If none of this impresses you, please go and make something that will still be around in 4,000 years.